In this post about Korean alphabet, I will be introducing the final consonant and how it is added to a syllable.  Up to now, we’ve only been looking at syllables that end in a vowel. The final consonant is the last thing added to the syllable block.

But before we continue, let’s first review what we have learned so far.

Let’s do a quick review

You should now be familiar with all the characters in the Korean alphabet, Hangul:

The consonants can be grouped into three different types of sounds:  plain, aspirated, and tense.  In the table below,  I will use the vowel ㅏ [ah] with all the consonants so you can read them out loud.

Repeat these three sounds over and over, paying attention to what your mouth is doing when you say them and what the differences are.  Then apply the same concept to the rest of the consonants in the table.

I apologize if my explanations about pronunciation seem frivolous and repetitive. My goal is not to make you sound like a native, because that is very difficult to do when you learn a second language beyond infancy.  But you still need to learn to distinguish between all the different sounds in Hangul in order to understand and to be understood when communicating.

For example, the word 사다 means “to buy,” whereas the word 싸다 means “to be cheap.”  Can you see where someone could be completely misunderstood when the listener cannot hear the word clearly?  You can expect similar emphasis on pronunciation in all of my future posts as well. Stick with me, and your pronunciation skills will be the envy of all of your Korean-learning friends!

In my experience, English speakers don’t seem to have as much trouble with the aspirated sounds; but they often have difficulty differentiating between plain and tense consonants. Just remember, practice makes perfect!

Remember the three syllable blocks that we learned in the last post?  They represent all the syllables that end with a vowel:

As I mentioned in the beginning of this post, when a Korean syllable ends with a consonant, the consonant gets added to that syllable block at the bottom.  The final consonant in a syllable is called 받침 [baht-chim], which literally means “support from underneath.”

I chose this word as an example because these two syllables are great examples of the next two types of syllable blocks: 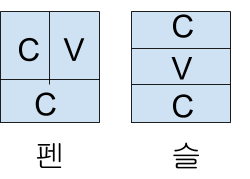 Next syllable block represents syllables that have consonant + compound vowel + consonant pattern.  An example is the word 원 [won], which is the South Korean currency. 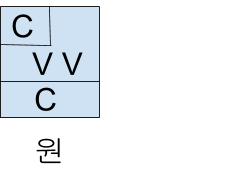 The last syllable block does not have an example, because I could not find any words that fit this type.  I included it just as a reference, because you will probably see it in other Korean language teaching materials and/or websites.  Following the logical pattern, it is conceptually possible to be written; but you likely will not encounter such words. So mostly, you will work with only remaining 8 types of blocks.

You now have all the information you need to write any word in Korean, as well as phonetically sound out any single syllable block.  You do have to apply some additional pronunciation rules when you read words with two or more syllables or when you are reading a sentence, but we will cover that as we go.

One thing that I need to mention when writing Hangul is that all strokes should be written from left to right and from top to bottom.

If you want to practice writing Hangul as well as learn the proper sounds, there is a great app you can download to your mobile device.  It is made by the Language Education Institute at Seoul National University. The app guides you through the proper stroke order and pronunciation and includes tests for you to see your progress.

If you haven’t done it already, you should think about installing the Korean Hangul keyboard on your computer and your mobile devices.

Keep in mind that on a Korean keyboard:

Once you have mastered the keyboard, you will be able to use more study references online, such as the Naver Korean Dictionary that I have referenced before and to which I will be regularly referring for word pronunciation.

Now that we are able to read and write more words, let’s add some words to our vocabulary:

In the last post, we learned some words in the categories of people, body parts, and food.  Now that we have learned how to add final consonants, we can make the lists more comprehensive (some words are repeated).  But I will not overwhelm you with too many. We will learn more in future posts.

Yes!  You’re correct!  남 is male and 여 is female (adjectives).  The words for “man” and “women” are 남자 (male person) and 여자 (female person).

You might be familiar with the popular song “눈, 코, 입" (Eyes, Nose, Lips) by Taeyang (태양) from the K-pop group Big Bang.  Listen to it and see if you can pick out those three words in the song.

I think that’s enough vocabulary to keep you busy until the next post.  Happy practicing! Be sure to also practice reading and writing the entire Hangul by putting the consonants and vowels together in different combinations.

I am excited to announce that we are now ready to advance into learning some grammar and  additional vocabulary! In my next post, I will be introducing you to some simple sentences.

Leave a comment below to let me know what you think about the SNU LEI app.  And as always, please don’t be shy to ask questions or give suggestions on this or any other posts I have written!